Some of my best friends

Between 2006 and 2009 a variety of videos were created by the duo Archetti/Wiget. Six of them belong to a collection entitled “Still Jokes In A Serious Matter”. All six films take place in the same setting: a white corner with a grey floor in their atelier. They always wear the same dark suit in all of the films. These soberly dressed gentlemen are seen dancing, singing, laughing or making music while their own tranquil music is playing in the background; music which, on the surface, has nothing to do with the scene.

Performances in a program 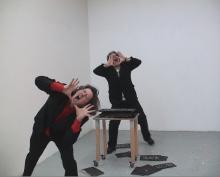