A fake discovery based on Walter Ruttmanns audio play “Weekend” from 1930 – the first ever abstract Sound Collage. Conceived originally as a sound collage with simultaneous projection of black film, in its “restored” version the film documents the traces of time. The question whether Walter Ruttmann ever thought about adding images to his sound collage remains open.

Performances in a program 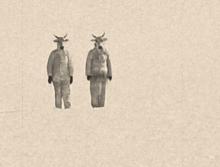