Between 1975 and 1978, cult film auteur Jess Franco directed more than a dozen of joyful exploitation flicks for Swiss producer Erwin C. Dietrich. Among those films are some of his most well-known titles, such as “Jack the Ripper”, starring Klaus Kinski, “Love Letters of a Portuguese Nun” and a bunch of ultimately sexy WIP (Women in Prison Films). The most notorious of those is the insane “Ilsa, the wicked Warden”, where sexploitation icon Dyanne Thorne - of the infamous “Ilsa” film series - plays the evil warden of a very sex-free penitentiary. Extreme and crazy, this film also offers us the possibility to appreciate the Master Jess Franco as an actor, and finally gives us the opportunity to pay tribute to his late wife and muse, Lina Romay, who sadly passed away on February 15. 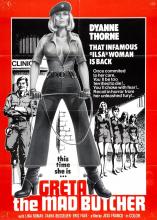