Georgette Meunier is released after serving a prison sentence for the accidental death of her husband. She longs for her beloved brother Emile from whom she was parted as a teenager and whom she still loves with a passion. The embittered young woman develops an aversion for men and soon begins to lure an endless string of one-night lovers to kill in cold blood. Her taste and expertise in the art of murder steadily grow and she turns into a genuine praying mantis.<br />Tania Stöcklin worked as a film editor for Peter Liechti and delivers her first movie after completing a degree in film studies in Berlin. She describes it as a black, modern fairy tale for adults. Black it is: a frightened princess transforms into an incestuous misanthropic killer; Prince Charming is altogether missing; and the kingdom of fairies - a dull, bleak, nameless town - has a nightmare feel to it. A surprising film, both twisted and funny. 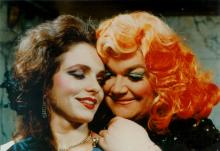