He is Japanese manga artist.
Mr.Takashi Nemoto (*1) was born to 1958 in Tokyo. A constellation is the Crab.

"GARO" was the most famous undergroud comics magazine in Japan. And it produced a large number of many talented comics artist. Yoshiharu Tsuge and Suehiro Maruo, etc. (*3)
Since it came out,although he is "manga-ka",he is walking on the wild side of Comics industry as consistency. His comics are often set from the owners of general good sense as the object of dislike.(*4)

But,His Enthusiastic popularity will not decline for 20 years or more since a debut. He is the leading person of Japanese underground comics and underground culture.
Mr. Takashi Nemoto is the man called the President of "Tokusyu-manga" (alternative comics/avant-garde comics/outsider comics/psychdelic comics/surrealistic comics/underground comics)"

Notes
*1:In the reading Japanese syllabary of a Chinese character, his name may be called "Kei Nemoto" other than "Takashi Nemoto." But, according to him, how to call which is used.
*2:He drew like surrealism an unbelievable misfortune and unreasonable persecution which fall on on Mr. Toukichi Murata and his family who lives on traditional family love of Japan.
*3:At the end of the 20th century,"GARO" was purchased by the entrepreneur who is completely unrelated to underground comics.Then,all staff left the company, founded the new company"serinkougeisha", and started the new comics magazine "AX".Now, Nemoto moved the base to "AX".Incidentally,"GARO" did natural disappearance.
*4:The reason is that his comics often conflict with the ethics view of Japan and Japanese people.

Kawamura Kosuke is younger, but he is embeded in the same twisted and engaged line as Nemoto-san. Member of the very good underground  magazine ERECT’s team, he is publishing his own hallucinated and hallucinating collages, and in the same time he is documenting with his own eyes other artistic movements, as the beat-punk-indus scene of San Francisco. His cut-up art is not an imitation, it is something different at the prurient core of the manga art.

Together, Nemoto and Kosuke, they will compose a sound mix to listen in details, as the amazing visuals they made for deNoise nights and for the LUFF does Tokyo !!!!! 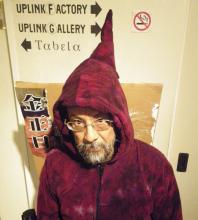 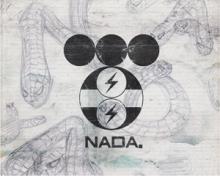