Schimpfluch (which does not mean ’abuse’ in german) is a lose collective of  bruitists and performers dealing with “psycho-physical tests and trainings“, at the core consisting of Rudolf Eb.er, Joke Lanz and Dave Phillips.
Rudolf Eb.er, a.k.a. Runzelstirn & Gurgelstøck, founded Schimpfluch in December 1986, and coined the concept of “psycho-physical tests and trainings“ which includes audio/sonic art, actionism, bruitism, performance, musique concrète, painting and installation-work, and deals with therapeutic and analytical actions and reactions of the psyche, the body, and of senses and realities (of both the performers and the audiences), in a radical, critical but also liberating way - an attack on the mind as well as a stimulation of the senses. it can also be seen as a polemic catharsis that takes its inspiration from radical social and cultural criticism that seeks elevation and dignity from veiled pain, from the highest notions of philanthropy and from strongly nature-bound environmental awareness.
Although dwelling in obscurity, Eb.er has gained immeasureable respect performances as well as for his very unique cut-up techniques, a strict compositional yet organic process that some say is viennese actionism put into sound, but probably has more to do with martial arts attack patterns, where even the silences inbetween sounds describe a composure that causes maximum tension.
Dave Phillips, a.k.a. dp, was a founding-memer of the short-lived (1986 – 1988) yet influential swiss hardcore-extremists ’Fear Of God’, before he joined the Schimpfluch Collective in 1991. in his solo-works (since 1987) he uses the voice as a central point of focus, field recordings and hard-hitting ’concréte’ sounds in a strictly compositional context, to create actions of an animalistic nature that wish to lead human behaviour back to instinctive and emotional aspects of existence, in search of origination, and in the sense of a primal release, a release that opposes the omnipresent reduction of existence and that desires to cast aside artificial arrangements, constraints and values. coming from a rather punk/political background Phillips creates a personal, intimate communication, that depicts as well as questions the modern world, that cries out, for change. Phillips is also a member of OHNE (with Tom Smith/TLASILA, Daniel Löwenbrück/Raionbashi, Reto Mäder/rm74), formed the one-man-band ’dead peni’ in 2004, and has collaborated with people such as Randy H.Y. Yau, John Wiese or Masonna.
Eb.er, Lanz and Phillips, collectively a.k.a. ’Schimpfluch-Gruppe’ have toured extensively and have numerous releases to their credit. And who knows, they might even perform as Schimpfluch-Gruppe....

Rudolf Eb.er's visual art is the visible translation of his psycho-acoustic tests and trainings. Noise for the eye. The razor cut eye from Buñuel's Un Chien Andalou. Eb.er is a complete and complex artist : anatomist, master in martial arts and scientific visualisation. His art works owe a lot to Viennese Actionists, this must be genetic : he is Austrian- born. It also recalls Artaud's theater of cruelty. He paints, draws, photographs, sometimes uses computer. Whichever means he uses, his art is carnal, aggressive, brutal,disturbing, and radical because surgically accurate and never gratuitous. His paintings scream at you, his photographs puke on you like humoroid dramas...

Dave Phillips has been active for over two decades on the international underground scene. He were the bassist of the early innovative Swiss grindcore band Fear Of God from 1986 to 1988. A compilation dedicated to the band, "The End of Fear of God", features remixes of the band by international artists such as Merzbow, Mike Patton, Yamatsuka Eye, Kevin Drumm, Kid 606, Voice Crack, Jim O'Rourke amongst others. At the same time, he started producing his personal work under his own name, mainly guided by improvisation and an acoustic approach of noise music. At the beginning of the 90's, he took part to "Psychic Rally", an experimental Zürich broadcast. He also collaborated with Joke Lanz in the Sudden Infant project and composed soundtracks for cinema and dance. He then worked in the Schimpfluch-Gruppe, noise collective, with which he began to collaborate with label Tochnit Aleph. His last works are caracterized by the importance of silence and the contrast that occurs with violent sound impacts. 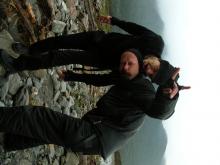 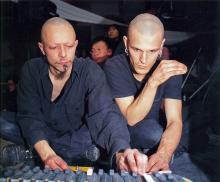 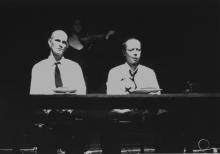 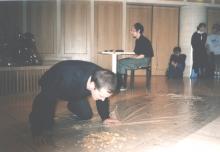