Sachiko M, a proudly independent improviser, has been in the spotlight internationally for manipulating sine waves of a sampler's internal test tones, extremely simplified minimalist sounds using switching noise, and her approach to music with meticulous attention. Since 1994, she has been active as a central sampler player involved in the cut-up and plunderphonics (audio piracy sampling). In 1998, she drastically changed her approach and originated her own method of playing the sampler. With the release of Sine Wave Solo in 2000 consisting entirely of sine waves, she became the focus of interest on the international scene including British magazine Wire, and European music festivals. Since then she has been active in a number of projects including the experimental electronic music duo Filament with Otomo Yoshihide, the electronic trio I.S.O. with Otomo Yoshihide and Yoshimitsu Ichiraku (from Yamaguchi), a duo with Toshimaru Nakamura, and the duo Cosmos with Ami Yoshida. She is currently working on solo works and projects--the live series "Bar Sachiko" and the sound installation "I'm here." 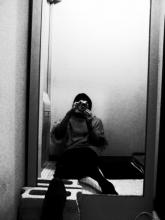