The trio gathered, in 2007, 3 monsters of the current japanese indie music movement : Atsuhiro Ito, mythical as inventor of the Optron, who already strid along the european stages with his solo project ; Hiko, over-active and wild drummer for japanese hardcore / punk band such as Gauze ; and Kuro Pipe aka Stardust, the thousand faces guitar player, who also sings for the chaotic Kuro Pipe Stardust band and is reknowned as the organizer for some of the most insane parties in Tokyo. Their perfomance at LUFF in 2009 was their first show in Europe as OFFSEASON and since that moment we have built together the LUFF does Tokyo.

Tonight, OFFSEASON will play with the amazing video artist, Yudayajazz. He will add to their chaos his special control of image and sound synchronization on an audio/visual platform outfitted with a set of turntables, a laptop, video camera, microphone, and multiple projectors. 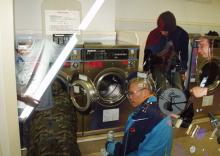