Performing since 1994 - under pseudonym Phroq until 2009 - Francisco Meirino lives and works in Lausanne. He explores the tension between programmable material and its inherent potential failure. He focuses on what is not supposed to be recorded - the end of life of a sound system, electrostatic background noises - and how those technical sound failures can become esthetically interesting sounds in themselves.

His work expresses his fascination for sound as physical intensity and the precison of the details caracterized by pure noise explosions. His tools are mainly laptops, magnetic fields detectors, piezoelectric microphones and various acoustic devices. Since the beginning of his artist career, he performed more than 100 shows in many places and festivals in Europe, Japan and North America. He also collaborated with many international artists in a studio or on stage. 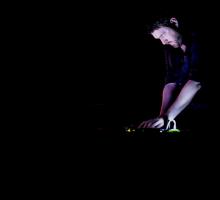