Laurent Peter was born in l983 in Geneva and began composing in 2002 under the pseudonym of d'incise. He focuses on various forms of electronic music, inspired as much by the pioneers of deterministic music as by experimentations such as drone or electronica. His creations are made of sound disturbances, nervous breaks, melancholic atmospheres and he shows a non-hidden fascination for decay. After a first self-produced CD in 2004, he started distributing his music on various netlabels such Zyogen or Test Tube. Also, he passionately involved himself in free culture.
In addition, he practices free improvisation alone or with other musicians, working on textures, wrinkles, tensions, and spectrum. He acts as in a game, trying to escape the harshness of the machine and breaking distinctions between acoustic and digital manipulations. 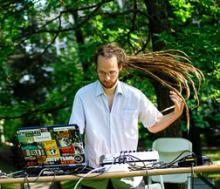